Ms. Tamayo Kotake has been in charge of hair makeups for many of visual-wise bands (rock bands that place importance on shocking looks) such as Malice Mizer. Recently, she has been responsible for 2.5-dimentional (in-between of reality and phantasy based on games or animations) stages tapping “wigs”, being ever busy daily. Last year, she published a how-to book on how to use existing wigs, “Cosplay Wig Bible” (Cosplay is short for famous “Costume Play”), which has gathered much of attention. She has told us why she started to aspire to become a hair makeup artist, her attitudes toward professionalism with various episodes mixed.

She attended the photo-shooting session of Malice Mizer’s then, not knowing well what “visual-wise” bands were.

Q: Tell us what first motivated you to start working as a hair makeup artist.

A (Ms. Kotake): I had been interested in a profession around fashions,thus I first worked as a hair artist in a beauty salon and went to a makeup school in Paris in 1991 as I honestly wanted to provide makeups for such fashion collections in France, when so-called supermodels were popular with the world’s fashion industry on the rise, greatly.

Q: What’s most impressive about your work is among all your hair makeup for Malice Mizer. How or why have you started to work for them?

A: Since I had come back to Japan in 1994, I had mainly worked around magazines. Then, a senior member of mine in my office was in charge of hair makeups for music artists; while I was helping him, I naturally started to work for the music industry. One day, a designer designing jackets asked me to “do hair makeups for a visual-wise band”, which turned out to be Malice Mizer. Honestly, I didn’t understand what that “visual stuff” was, at first; the designer told me it was about “double lines” (a method of makeup to put conspicuous lines above eyes). Double lines actually had been in fad for fashion collections in the early 1990’s. Then I believed I could and got to the shooting session to encounter Malice Mizer… I was at a loss as it was in fact closer to a stage makeup!

Q: You hadn’t expected that, had you?

A: At the time, they didn’t have any makeup artist specialized in them as they were right before making a major debut; they put makeups by themselves mostly. Then, I got there, and Mana asked me to “set his hair”. But I was not prepared at all as nobody told me anything about it. But there was a bit of “puffy hair” (stuffing material to give your hair a volume) ready. It was like a small dumpling, which they said “a former makeup pro had used”; I came up with a lot of ideas but looking at his attire like a party dress, I thought myself that it should be a nightly party and made his hair very “high”, using the small dumplings. I don’t know yet what I did at the time was right, though. And I also did Kami’s (drum) hair; he commented that his eyebrows became “elegant”, where I didn’t know whether he was lauding or denying my skills by that.

Q: We don’t normally use a word like “elegant”, right?

A: Then, Gackt showed up and also commented that Kami’s eyebrows were different than usual, being “elegant”.

A: The way their word, “elegant”, sounded was so shocking to me that I couldn’t understand anything then. In hindsight, it might have been ok, both for me and them. After the task, it turned out my assistant had known them already; she should’ve told me more about them, much earlier.

Q: But maybe you did your first job with them rather successfully because you didn’t have any bias around them.

A: I didn’t know the music industry at all, engrossed just in fashions themselves, not even knowing what “glam rock” was, partly 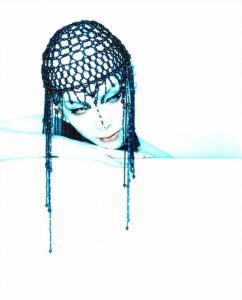 I feel that after all this or having experienced everything I needed to, I have finally come back to what I love indeed.

Q: You’ve done a lot of work around the “2.5-dimentional” world. We are convinced on that, as you started with Malice Mizer; have you been long interested in game / anime characters?

A: They may guess that I am someone who loves games and anime and checks those stuff all the time… Yeah, I do like them. But in fact, I didn’t have so many chances to watch anime or play games seriously. As I started to work for 2.5-dimentionanl musical stages only recently, the first one for me was a work named “Vampire Knight”, which was all performed by female casts dressing themselves as men, such as Akira or Root (fashion models who were popular in a fashion magazine, “KERA”, looking like a boy in their fashion for actually being female), where I joined them as their hair makeup artist. As I have worked with visual-wise tasks, “KERA” or “Goth-Loli Bible” (Goth-Loli is short for “Gothic Lolita”, meaning a fashion method that makes you as a grownup look like a cute kid in black / blue attires), they asked me to join.

Q: We believe that Japanese Cosplay culture to embody the 2-dimentional world (games / anime), as well as the visual-wise world, is getting attention around the world. What do you think about this?

A: I went to the first Japan Expo (held every year in Paris) for Mana, where I met many of his fans in France. People overseas have been searching for info on Japan, very seriously, which still is the case. Even what’re not much known in Japan are researched by and known to them. There are many who are savvy to the subculture of Japan overseas, possibly more than in Japan.

Q: Things made in Japan or disseminated from Japan, including wigs, are ever popular indeed, correct?

A: But when I was working with Malice Mizer, the lineup of wigs (being sold) was not so huge, really; I had to make them myself, like by bundling threads…, burning the midnight oil. Then, when I was asked to work for stages, I said if it was ok with my “own” wigs…, I would; the producer accepted it like that. My focus in making wigs, by the way, is to produce ones matched with the wearers’ face, not too unrealistic hairstyles.

Q: You published a mook (magazine + book), “Cosplay Wig Bible”, which summarized how to make wigs for Cosplay and your own works (Educational Foundation, Bunka Gakuen University, culture-related publishing section) last year, which has amazed us for its ease to understand.

A: The university is a school where you learn designing and making; it seems it has sympathized with my creating wigs. This book is a so-called “how-to” book on wigs.

Q: At the end of the last year, you worked for a 2.5-dimentional, brain-crashing drama “DRAMAtical Murder” (25th Dec. 2019 – 29th Dec. 2019) as its hair makeup pro. We’ve heard that you will work for another 2.5-dimentional musical, “Final Fantasy Brave Exvius, the Musical” that will start this March, as one, this year.

A: I’ve got some connection with FF (Final Fantasy), as I am making wigs for FFBE’s (Final Fantasy Brave Exvius) official Cosplay and Gackt has become a model for FF. I have been offered this job, not directly related to this connection, where I think what I’ve done so far is bearing a fruit. I originally entered the world of hair makeup as I loved fashion shows and wanted to help produce stages or something like that back then; I feel I’ve experienced everything I wanted to or had to, and come back to what I really love. Recently, I have been also offered a job related to haute-couture fashion using wigs.

Indeed, you’ve gone through everything you need. We anticipate your further endeavor as possibilities are immense. Thank you very much for sparing us time on your precious topics for today!